When I was growing up one of my chores was to mow the yard. By the age of twelve  I was reminded every weekend that the grass was not going to cut itself and the longer I waited the more torturous the heat would become.  It was grueling work and I often fantasized that my adult life yard would consist largely of rocks or better yet a field of concrete.   Of course I never minded the money I earned from mowing the grass after it was done…it was how I bought my first surfboard.

Fast forward to now… I am on the lawn of torture,  except the victim is my son–Special K.

Aside from the life lessons of learning to work hard, the value of a dollar, doing a quality job and doing it right the first time, there is an extra bonus of learning it’s okay to be different.  Why?? you wonder is mowing the yard capable of teaching such a valuable  lesson in individuality.   You see years ago my father purchased his second Push Reel Lawn Mower.  I have no idea what inspired him to make such an investment,  his yard was ginormous and there’s no way he would have logically thought his time was being well spent.   After spotting the contraption in his garage one day I inquired about possible ownership, as my patch of grass was very small.  The thought of  no gas, oil or stinky-ness taking up valuable garage real estate was very attractive and I actually enjoyed the funny stares of passing neighbors.

Push forward one more time and my father has once again purchased another Push Reel Lawn Mower. His intentions…I have no idea, I think he just loves them.  As for my son, he is being motivated to start earning money and you guessed it….by mowing lawns.   My father happily offered to trade his “new” mower for lawn services and Special K accepted. (We did not know the model of mower at the time of agreement 🙂  Boy was he surprised when his money making machine was dropped off in the driveway!  Utter confusion and disappointment could be read all over his face from miles away.  So yesterday when the mower was given it’s trial run there were a few hiccups…most of them centered around embarrassment. After many conversations throughout the day it seems that the mower may have some advantages and is going to be given a fair try.  That is all I can ask. It’s hard to be a kid.

His sister on the other hand had no problems~ 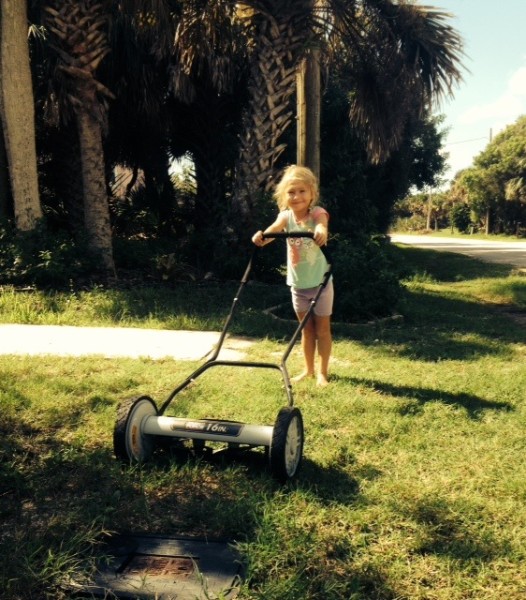 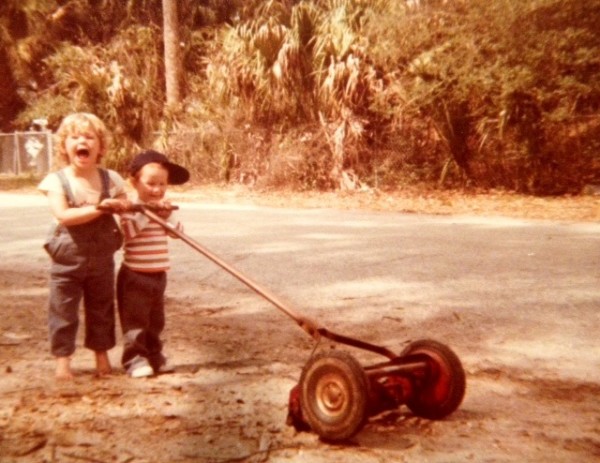 Cheers to working hard and having a laugh while you do it!