As a child growing up down the street from the birthplace of Nascar and living a few years in the Carolina hills, the backyard of some true racing legends, it seems pretty reasonable that there is racing blood hauling arse through my veins.

My father is the epitome of a race fan.  He was rooting for Earnhardt long before it was cool and would listen to the races from one end of our house to the other, even sometimes playing it in his truck with both doors wide open so he could hear it outside.  I recall many evenings as a family when we would pack up and head to the closest dirt track for some Saturday night entertainment.  Posting up in the bed of our pick-up, snuggled in jean jackets and my dad’s army blankets, eating Vienna Sausages straight out of the can, watching cars speed round and round a dusty, dirt track as crackly noises boomed from the loudspeakers and churning engines polluted the air.  I loved those nights! My father and two of his buddies would eventually fulfill a bucket list wish  and purchase a car which they took turns racing for one season.   I am pretty sure it had no breaks or reverse, which made for some pretty exciting racing, on their behalf anyway.

The day I became a true Nascar fan was during the 1980, Daytona 500.  I went with my dad and his friends down to the race in the morning, setting up camp on the back stretch where there used to be wooden bleachers.  The racing lineup was handed to me and I was instructed to pick one of the drivers for the betting pool. Being five years old, my choice was based completely on what name sounded the prettiest.  My pick was Bobby Allison.  Not only did I happen to choose “one of Nascar’s 50 greatest drivers” but he also happened to come in second to Buddy Baker that year. I was elated.  I would never call myself a hardcore fan but it didn’t hurt that Bobby had a very exciting racing career. The best victory being when he crossed the finish line first, with his son Davey right behind him.

It made sense that I would become a Davey Allison fan once Bobby retired.  One evening during the speed week time trials I happened to be in line behind Davey at the Daytona Mall Hallmark store.  I didn’t recognize him until another customer started getting excited, mumbling his name under her breath.  I timidly asked him for his autograph.  The only thing I had for him to sign was a Valentine’s Day card I was buying for my friend.  I don’t think she was half as thrilled about the additional signature as I was.

After Davey died in a tragic helicopter accident in 1993, I quit paying too much attention to the racing scene.  I still enjoy going to them and am a huge fan of the noise and cruising around the infield (you never know what you may witness in that microcosm.)  With the most prestigious  race just a few days away…there’s an energy circulating in the air around the Daytona International Speedway.  It also helps that Jeff Gordon, who recently stated that he will be retiring, won the pole and will be starting first.  Should make for a pretty exciting afternoon.

I will always be a fan of racing, just probably not one of the crazy ones. 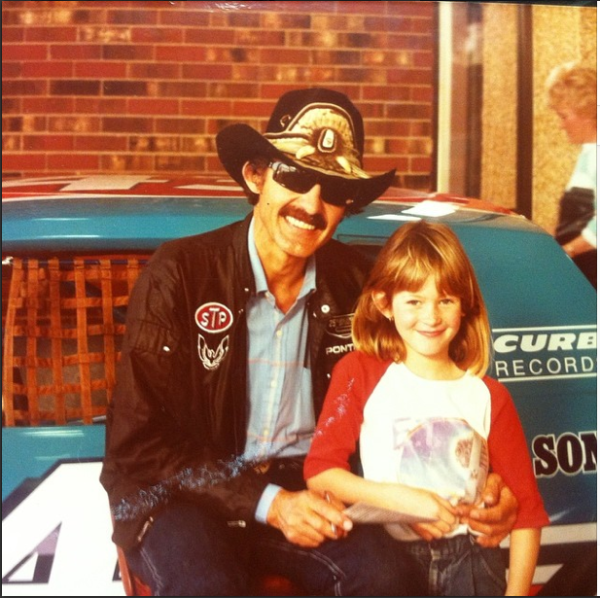 After I started writing this post to double check dates and facts, I found a really interesting article about the history of Number 28 in Nascar.  (Buddy Baker and Davey Allison both raced the #28 car) http://www.foxsports.com/nascar/story/remembering-no-28-from-buddy-baker-to-fred-lorenzen-and-davey-allison-012515.

Hope you have a great day and enjoy the show!